Popular posts from this blog

Introduction to a Chemical Engineer 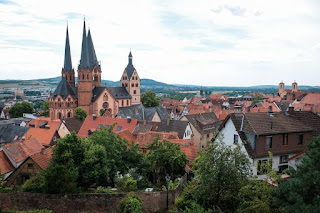 My previous blog about my favorite place is pretty close to where I was born. I was born Gelnhausen, Germany on December 14th. Gelnhausen is a really small town founded in the Middle Ages, about 40 minutes east of Frankfurt. My mother's side of the family had lived in the northern part of Germany in Schleswig-Holstein until my mother left home to work in Frankfurt for a number of years. She met my dad while he was stationed in Germany on active duty. Shortly after I was born we moved around the States from Tennessee, North Carolina, Georgia, then finally Oklahoma where my dad decided to retire. Lawton, Oklahoma has been my home for roughly 10 years, making it the longest place I've stayed thus far.
https://www.nina-travels.com/gelnhausen-germany-best-things-to-do-and-see/ The Church of St. Mary
Whenever people ask me where I'm from, I have to make a split decision if I should just say I'm from Lawton or give them the whole spiel of where I was born versus where I gr…
Read more

Week 7 Story: Why the Dog and Cat are Enemies

Once upon a time, there were two roommates and they had a platinum laptop. It was a special laptop, with immense power and can operate without Wifi anywhere in the world. But this they did not know, and sold it for a decent price to buy tickets to Lollapalooza. No sooner was the laptop gone than they began to grow dumber and dumber, and at last failed all of their classes that semester. They became stressed out and financially low since they had to pay for another extremely expensive semester to retake classes and ultimately miss Lollapalooza.

They had a cat and a dog who suffered from this as well. Their owners were paying them less attention and food started running scarce. They two animals brainstormed ways to fix the problem. Finally, the dog hatched a plan.

"They must get their laptop back" he said to the cat.

"The laptop is in a safe guarded by the government, how will we manage that?", asked the cat.

"We must …
Read more